Vasilis was born on 26 June 1998 in Ptolemaida, Kozani. He was only 13, when he made his first steps on drums, initially as a self-taught, influenced by leading drummers such as Dave Weckl, Steve Gadd, Volkan Oktem, Jojo Mayer, Steve Smith etc. At the age of 16 he started music lessons with Professor Stelios Moisiadis, who was his first influence that learned him the Jazz music. From 2016 he studies at the Contemporary Conservatory of Thessaloniki (Σύγχρονο Ωδείο Θεσσαλονίκης) in the Jazz-Blues-Rock section. His first Professor was Prof. Kostas Pagonidis and then Prof. Alexandros Spanidis. His professional career as a drummer began at the age of 15 as a member of a local traditional style band called "Rithmos kai Melodia”. Vasilis loves the compound, mixed measures, which is the basis of the band he belongs now. Until now, he has collaborated in 5 times (recordings) with various artists from Ptolemaida region. 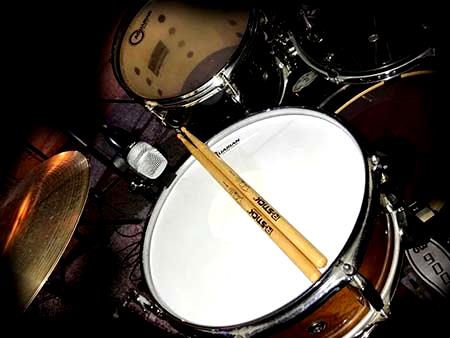 The best way to find the right drumstick for you is to try different variations and see which feels most comfortable. But these are some basic guidelines will help you make your choice The history behind the numbers and letters stamped on drumsticks. The letters originally stood for styles of music, while the number was related to the stick’s diameter. The larger the diameter, the lower the number. Some of this coding still applies to today’s basic stick models. Here’s a breakdown of what the companies used back in the early 1900s, when this system was first established.The letter A stood for orchestra.The letter B stood for marching and concert bands.The letter S stood for street band. The letter D,stood for dance band. 2B is the most common size for a thick stick. 7A is the most common size for a thin stick.