Peter (Bones) Rathbone Born in the UK educated at Drumtech London part of the Power House music schools and Thames Valley University. Playing live and sessions for the past 35yrs touring in the US and Europe with the Bone Project, Max Aloisi Trio and numerous signed and unsigned bands after finishing with UK top function outfit Off the Record Pete moved to Cyprus and was contracted to play for Greek X Factor and Pop Idol winners Valando Tryfonos and Stavros Michalakakos. Later started The Decoys and Multi award winning Function band The Cover Up. Along with this Pete owns and runs Wraith Drums the only Custom drum maker in Cyprus making Drums and Cajons and is also the part of the team that runs two of the biggest Rock and Pop festivals on the island. Party in the Park years 2010 to 2019 and Cyprus rocks 2017,18, 19. Pete Now runs DrumGeek.info the largest drum community network on the planet covering 80 countries and 1100 manufactures. 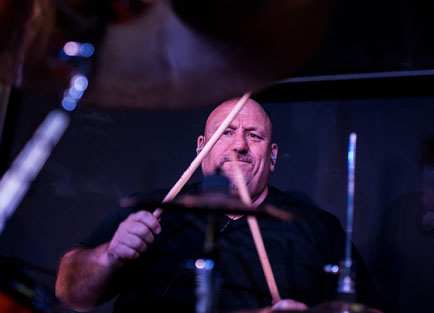